The only real geology on our journey from Vernal to Granby was at Dinosaur National Monument but that geology was rather spectacular. I remember on one excursion looking with awe at a hollow in the rock and being told that "this may be the footprint of a dinosaur" and hoping that one day I would see something a wee bit more convincing. If you want something more convincing Dinosaur National Monument is the place! 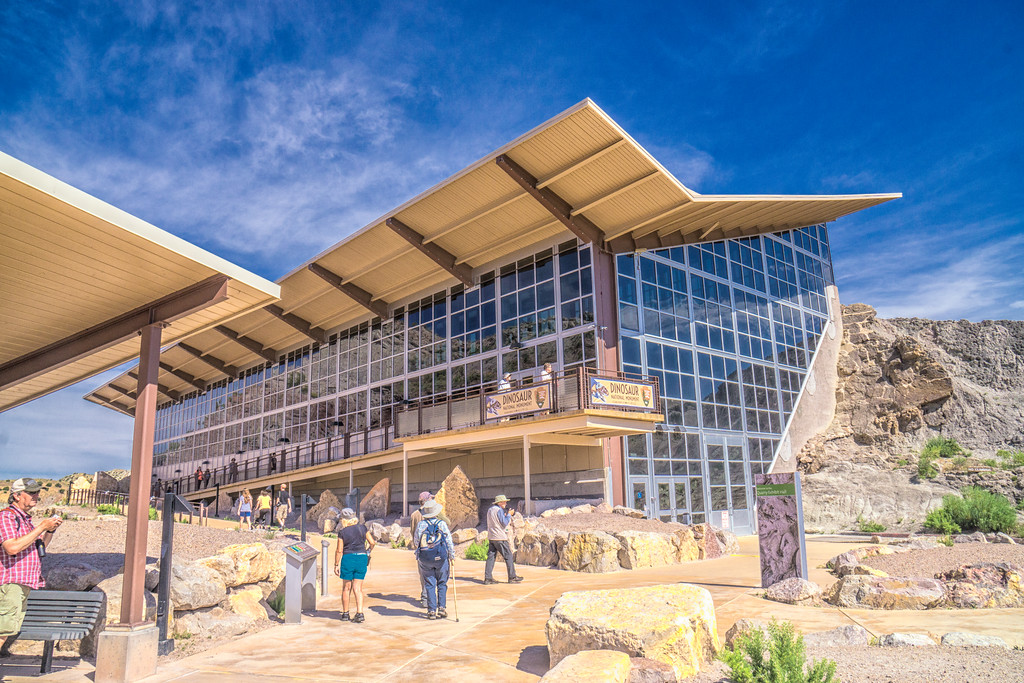 This building covers what is left of the Dinosaur Quarry. Much of the quarry material has been removed to grace museums all over the world. But there is still a lot left!

The quarry face inside the building. Photography of the whole face tends to be rather disappointing as the bones are much the same colour as the rock. But closer examination shows how much there is to see.

A close up of the quarry face showing various large bones. 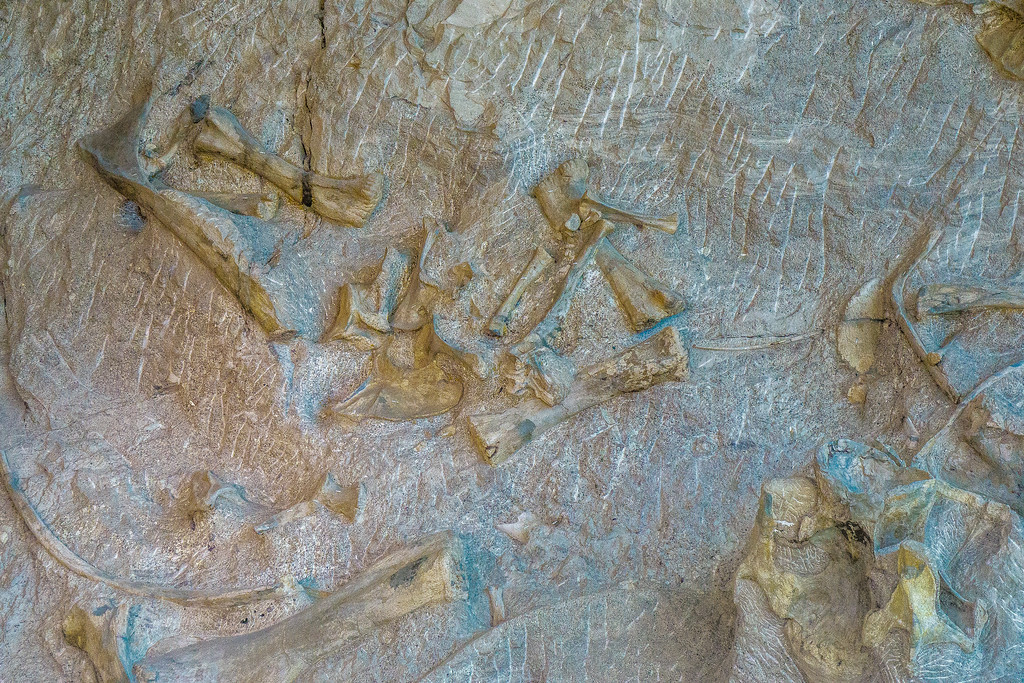 More bones on the quarry face, especially vertebrae. The plenitude of bones is thought to be caused by a flash flood racing down a river valley, picking up all the bones of dead dinosaurs scattered about the place and dumping them downstream as the force of the flood subsided.

A Camasaurus thigh bone, extracted from the quarry gives an indication of the size of these creatures. 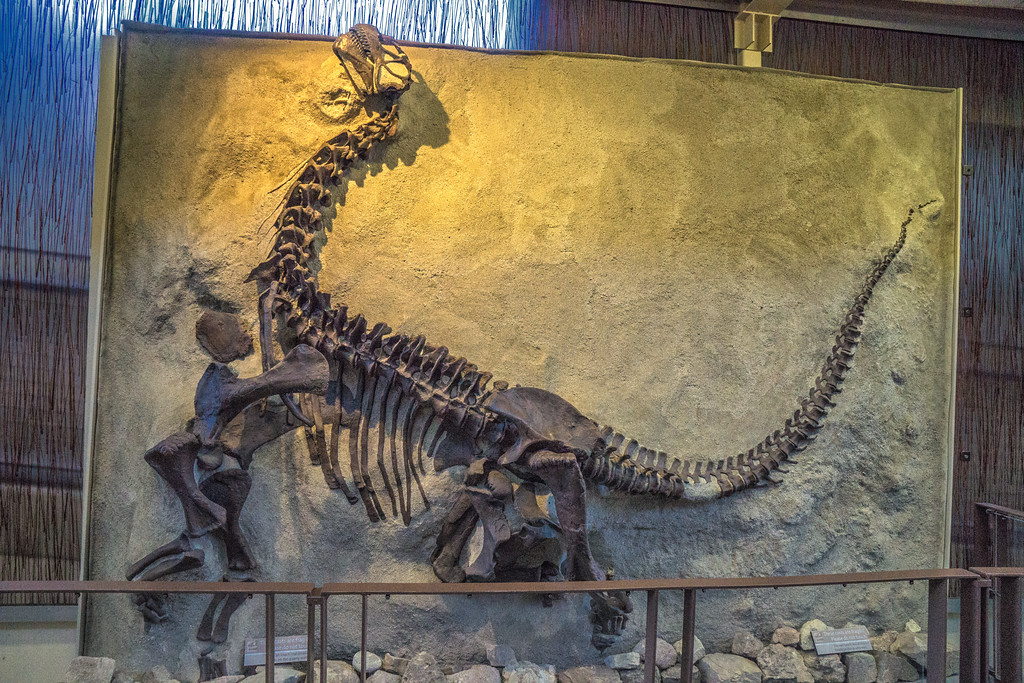 A cast of a young Camarasaurus

Cast of an Allosaurus excavated in east-central Utah

Head of an Allosaurus excavated from the quarry. The most common predatory animal in the Morrison. 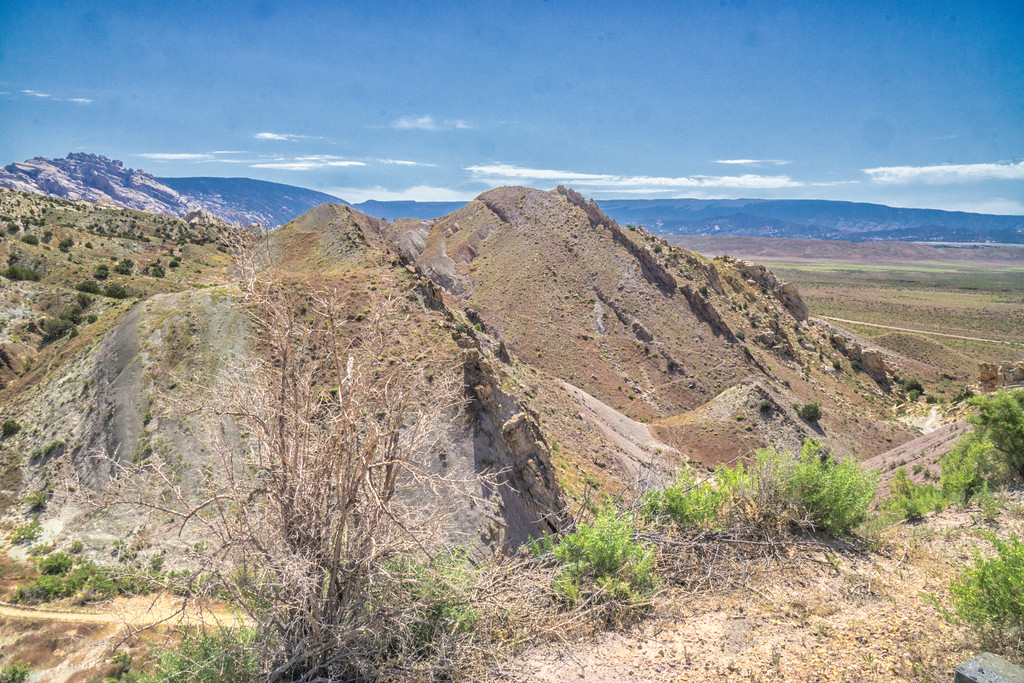 The view from the quarry car park, looking across the footpath back to the Visitor Centre.

Not all the dinosaur fossils are under cover! This fossilised bone was found on the path back to the Visitor Centre. Note the coin for scale.

After our visit to Dinosaur National Monument we continued our long drive to Granby. Doug explains the geology we crossed HERE but we did not stop to examine it in any detail. The scenery was rather good but we were glad to get to our, rather isolated, hotel in the scattered settlement of Granby.

I think this is Whiteley Peak, a rather nice looking mountain which was good enough to persuade us to stop and look.