A long drive today – more than 400 miles. A lot of it was along dirt roads and, as we got near Tom Price, along roads being used by heavy mine construction equipment.

At Tom Price we refuelled, bought food and wine and then headed for Karijini Eco Camp. There we got the same site as we had last time which felt like coming home -almost!

Today we decided to revisit Knox Gorge but to go downstream when we got there, instead of upstream as we had done last time.

But first we went to the lookout over Joffre Gorge.

The Joffre Gorge Amphitheatre from the lookout. We swam there on our previous visit.

Looking downstream – the view from the Joffre Gorge lookout

Then we continued our drive to Knox Gorge and descended the steep slope to the stream. 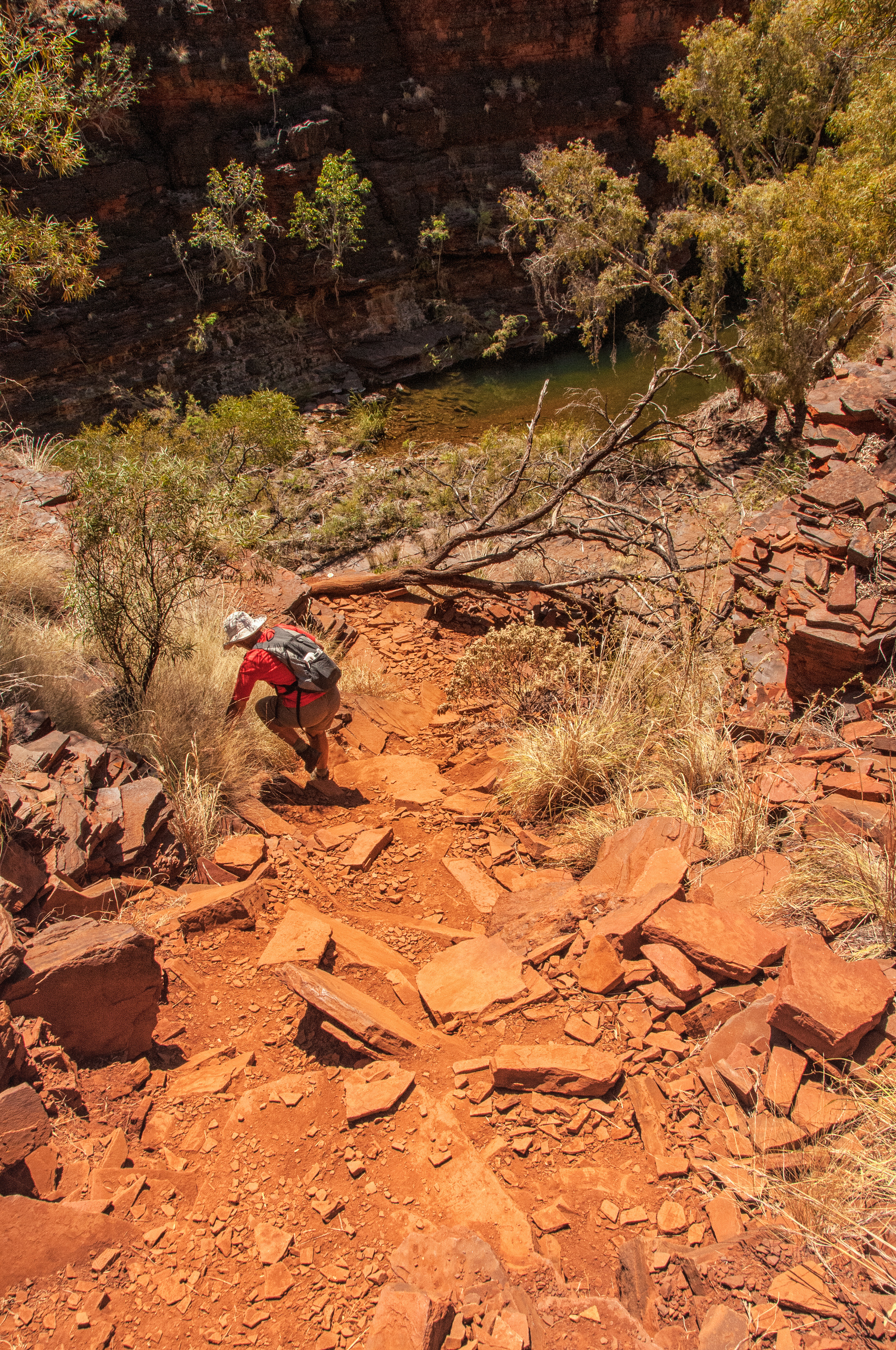 Chris descending the scree into Knox Gorge. We headed left – downstream when we got to the bottom.

It was fairly easy walking and we were able to wave to people on the lookout far above us.

In Knox Gorge. Note the people in the lookout (top left)

After a bit of easy scrambling we got to the end of the tourist route and contemplated the serious stuff.

The debouchment of Knox Gorge into Red Gorge. This carries part of the Fortescue River on its way to Wittenoom, Millstream-Chichester and the sea.

The man in the photo above runs trips into the difficult parts of the gorge. He supplies ropes, harnesses and hardware for descending the steep places. You have to supply a certain level of fitness and several hundred dollars.

While we were there he tried to persuade a couple of young guys to book him for the next day. He glanced at us and passed by with a smile. 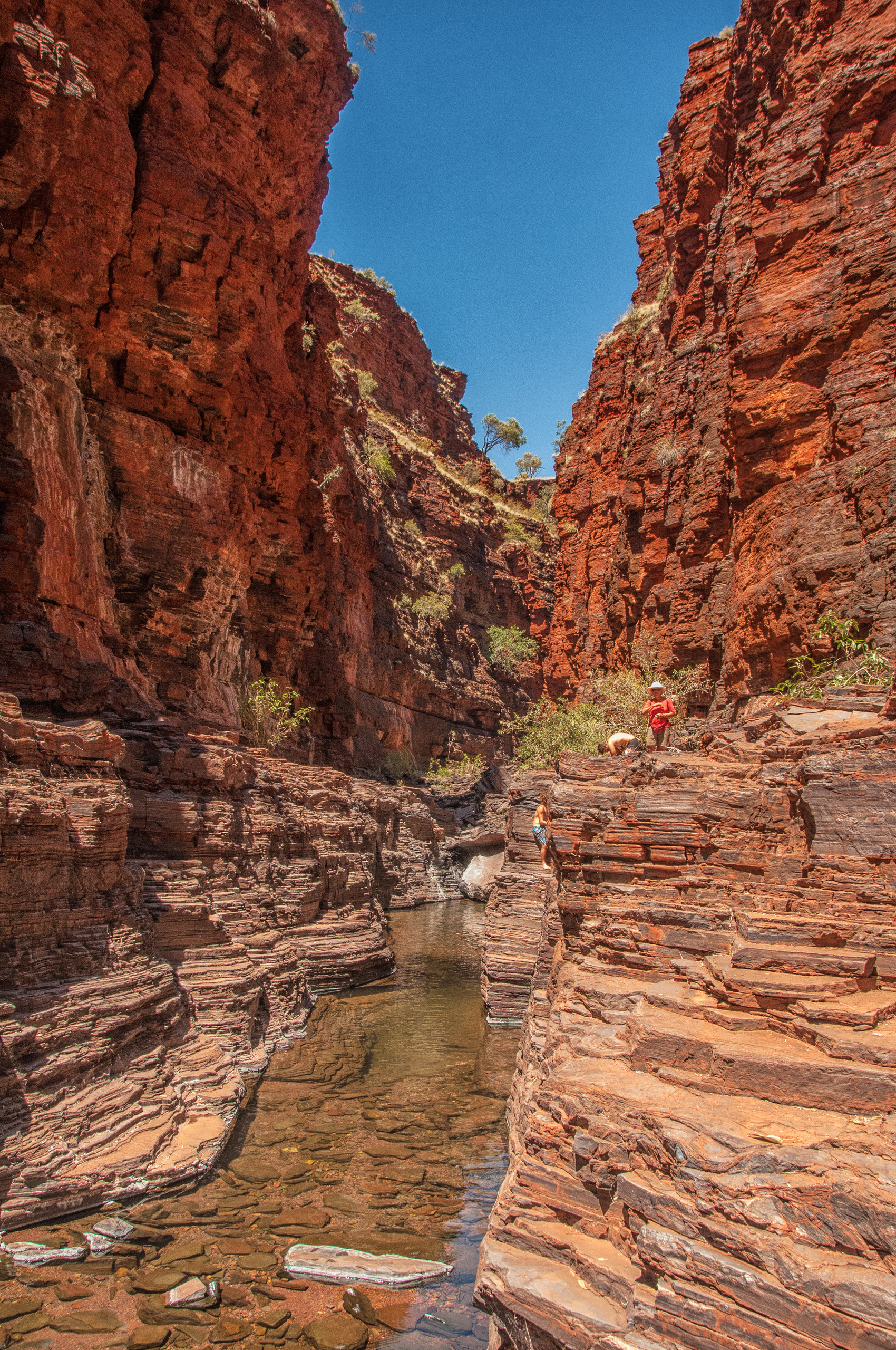 Just before you get to the end of the easy bit you pass this lovely pool which is great for cooling off. We met a couple of Italian guys who were having a break from working at Karratha.

On our way back up the gorge we took time to look at the rocks. In many places they look like a construction of Roman tiles. 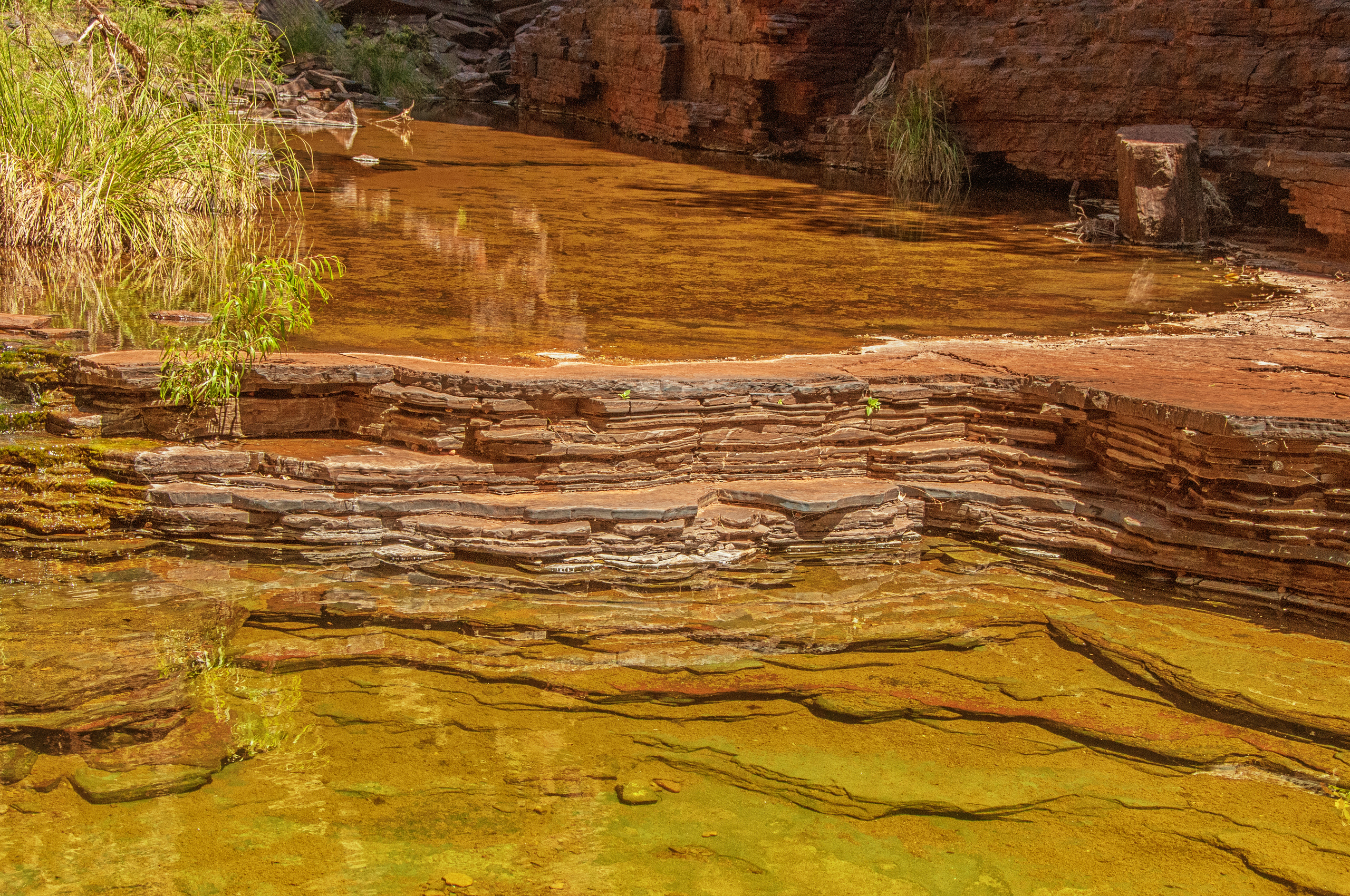 We were able to see the lookout from a different direction.

The lookout from inside Knox Gorge

When we got to the exit of the gorge we decided to continue upstream to the swimming hole we discovered last time we were here. 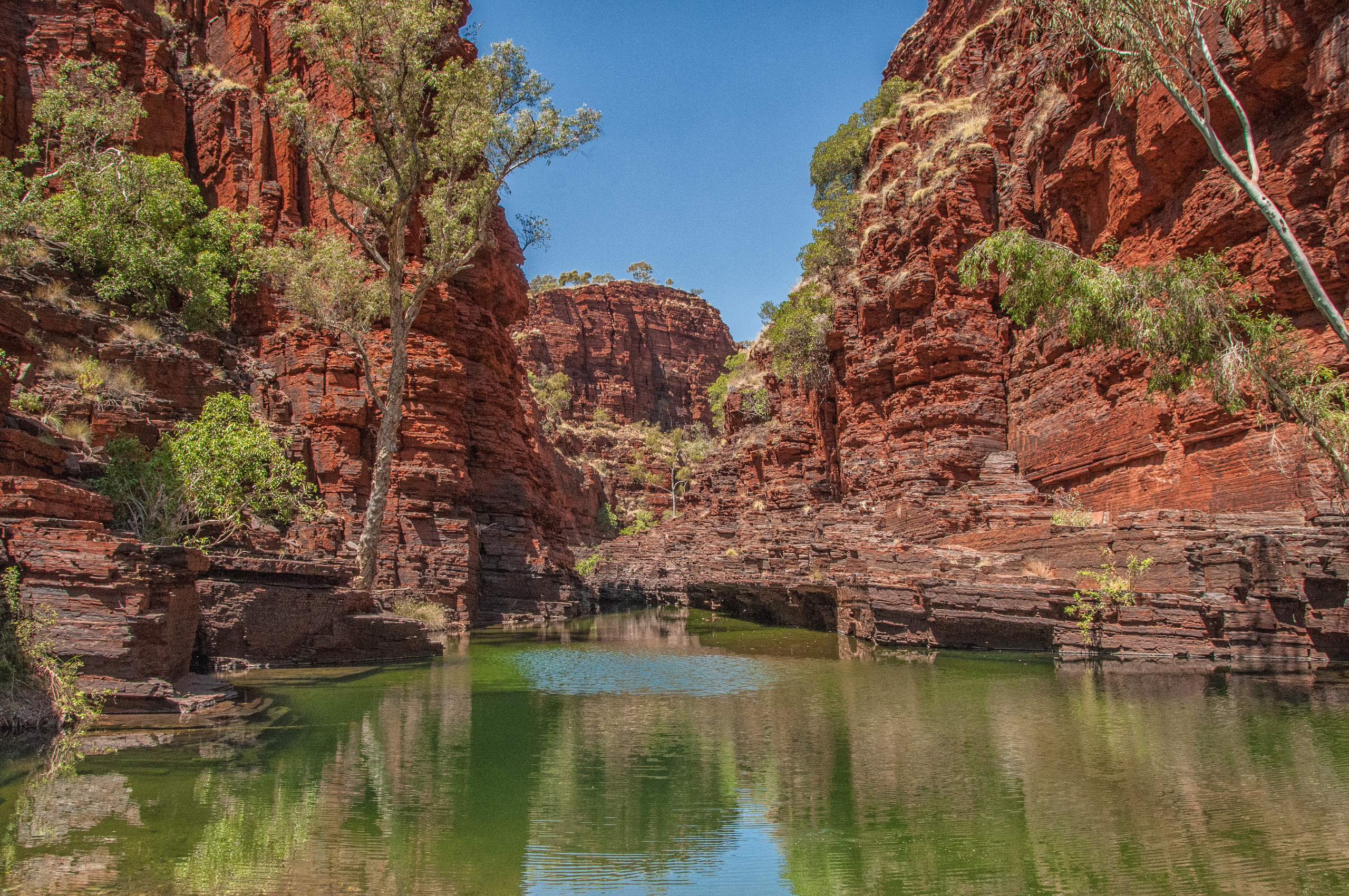 Chris at the swimming hole. I presume a waterfall comes down here in the wet.

It is a lovely spot and we stayed here for a couple of hours. Two couples arrived, swam, moved on and came back. They confirmed that this is the best bit!

Eventually we moved back to camp, caught up with our emails and bank account at reception, then had a nice supper at the reception.

To end what had been a very good day, a playful breeze caught a contact lens as I took it out and it disappeared. If you find it (Site 90 at the Eco camp) let me know! Thankfully I had my spare so all was not lost!

By Western Australian standards today’s trip was a short jaunt – only 112 miles! It was to Hamersley Gorge which is in the north west corner of Karijini National Park, but you have to go out of the park to get there.

Hamersley Gorge is impressive. There is a new approach road, parking, toilets and a lookout. Geologically it is impressive with some rather impressive folding and a very good demonstration of competent and incompetent beds. But more of this excitement anon!

Hamersley Gorge from the lookout. For scale note the people in the bottom of the gorge.

The upper walls of the gorge are folded and the thin beds show this very well. Note the whitish rock near the top of the gorge. These are thought to have had the iron removed from them by the action of humic acid produced when the local vegetation was steamy jungle! The iron was deposited in the colourful rocks below.

But the lower beds are not folded – they are dipping but, if they are folded, it is on a much grander scale than can be seen here. 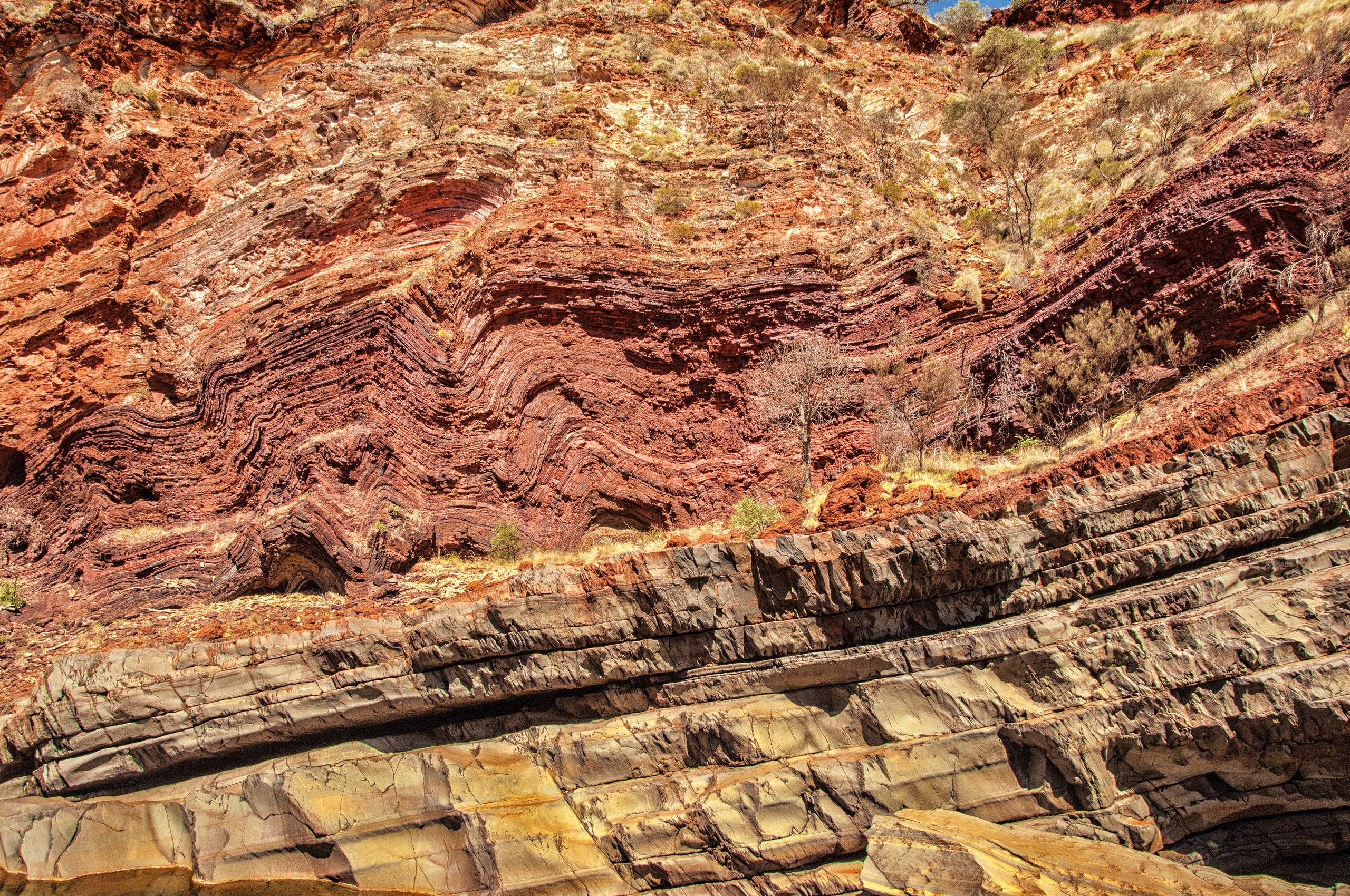 Folded upper beds resting on unfolded lower beds. Note the white rocks at the top and the colourful ones below.

Another view of the incompetent upper beds resting on the competent lower beds.

One speculates that when the area came under sideways pressure the weaker beds crumpled while the stronger ones did not – the difference between competent and incompetent beds. So the incompetent beds folded and therefore became shorter; the competent ones did not fold and retained their length. So there must be a slide between the two – a fault parallel to the strata. 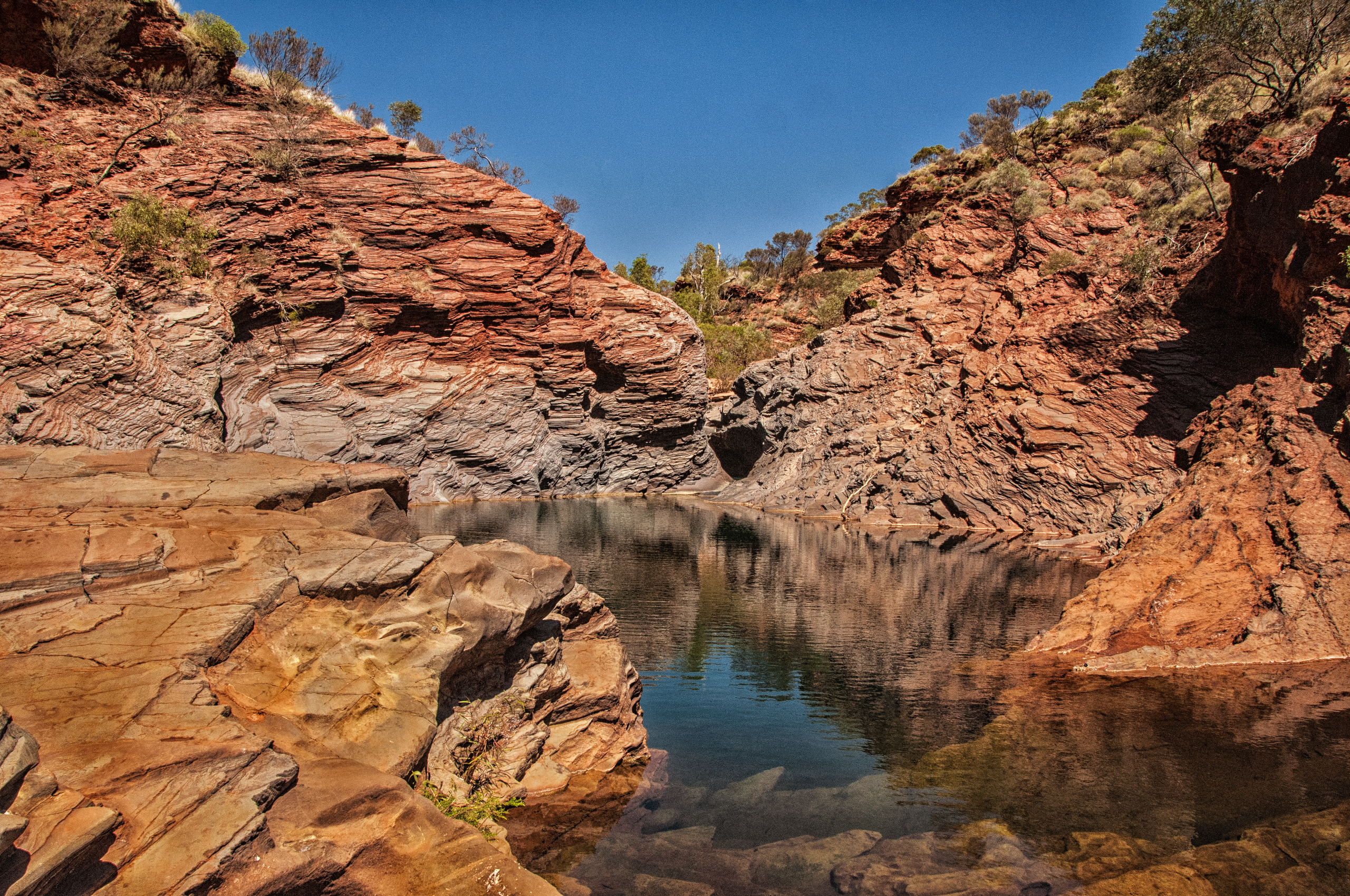 Another pool at Hamersley Gorge

We enjoyed our time at the gorge but soon we drove back to our camp. The next day we would be on our way to Marble Bar.