We drove the 211 km to Mornington Wildlife Sanctuary with little difficulty. We stopped in Mount Barnett to top up with some (very expensive) supplies and to fill up with diesel.

Chatting to the man in the store we were told that the Gibb River Road closes in the wet season and is no longer considered a road by the State. So, if you do not get a permit from the authorities in Derby, it is illegal to drive on the road! And your insurance will not cover you if you have an accident! He drives to Derby for the permit, but a lot of the locals do not bother.

Geological Map of the Mornington area, with our route to and within the Wildlife Sanctuary. Click HERE to get the map stored on my storage and from which you can download it at full size (down arrow at bottom right) and without my annotations.

Full size copy of the geological map without my annotations.

We eventually got to the turn-off for Mornington, passing some smallish bush fires on the way. At the turn-off we used the little radio shack to contact Mornington to enquire if there was a space for us. There was and we continued. It is more than 50 miles from the road to the camp and you are not allowed to stay if the camp is full. So it pays to call ahead. The map below shows our route and some points of interest along the way.

HERE is today’s route with photos. Open with Google Earth.

At Mornington Wildlife Sanctuary we were welcomed, signed in and told where we should pitch our tent.

The place is held on a pastoral lease by the Australian Wildlife Conservancy. Which is a bit odd as one of their aims is to remove cattle from the bush! Apparently pastoral leases are the only leases there are in WA so they do run some cattle to keep the lease effective. I understand that new legislation will allow them to keep the land without running cattle. 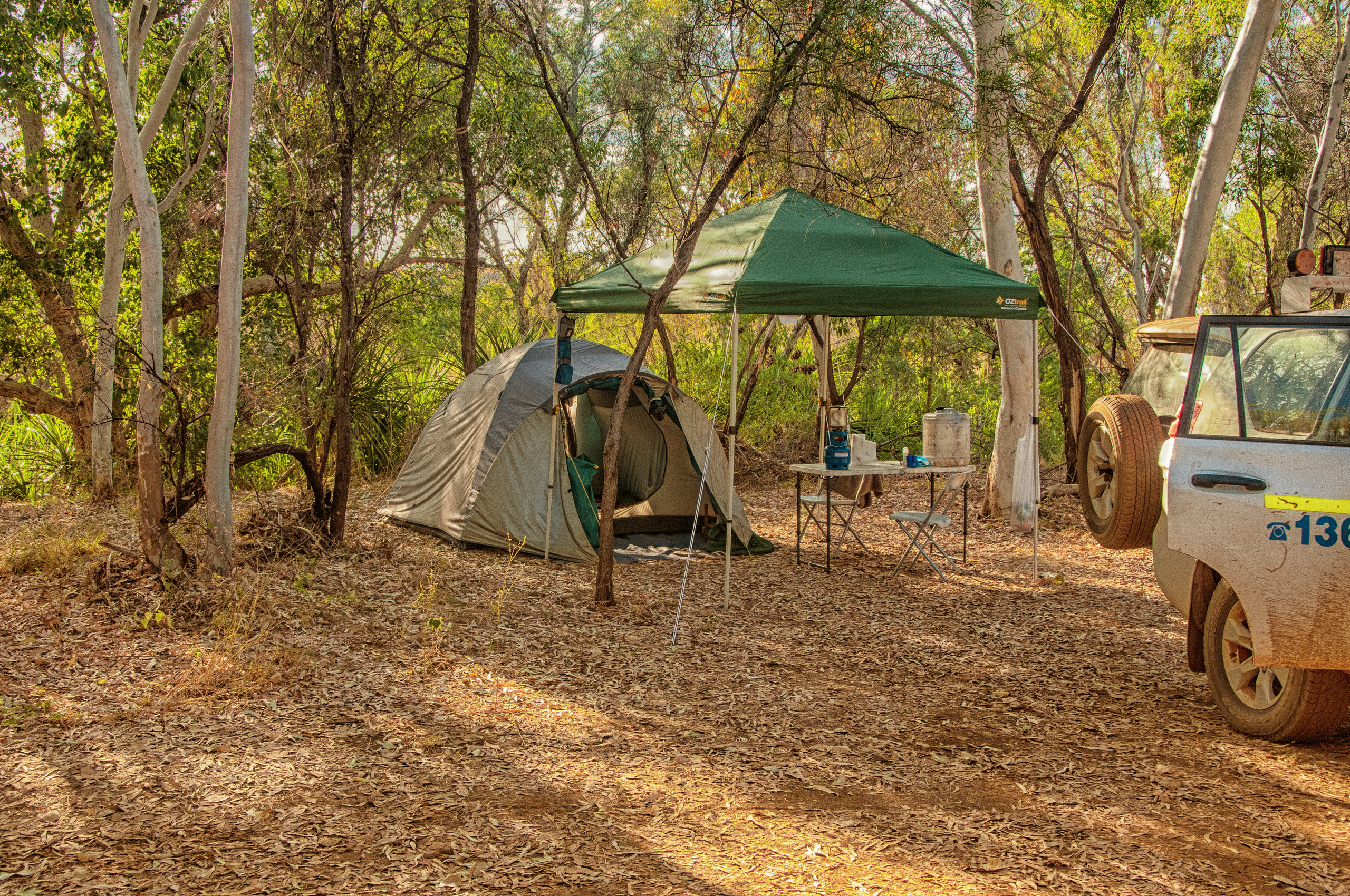 Our camp at Mornington Wildlife Sanctuary

After setting up our campsite we set off for the Bluebush swimming hole so that we could wash off the dust of travel. It was very pleasant except for the presence of March Flies – the biting ones! 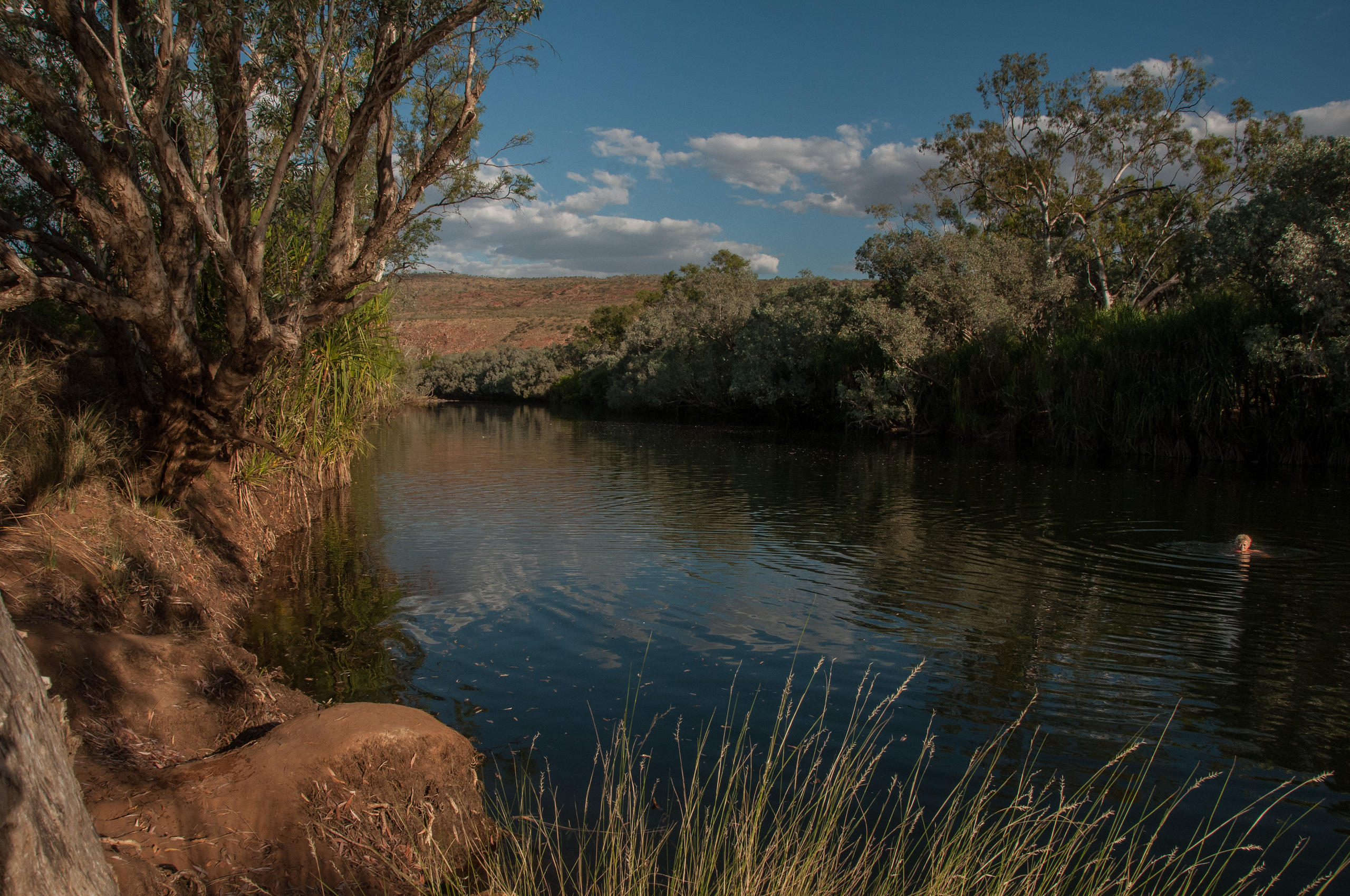 Chris at the Bluebush swimming hole on the Fitzroy River

After hiring paddles and life jackets we set off for the long drive to Dimond Gorge on the Fitzroy River. There we found our canoe and set off. We soon discovered that Chris was not a natural paddler. Eventually I asked her to stop paddling and to let me do it on my own.

HERE is today’s route with photos. Open with Google Earth.

We found a nice spot to stop and stayed some time sunbathing and swimming – and talking to the other paddlers whose interests were more inclined towards the animals in the gorge. 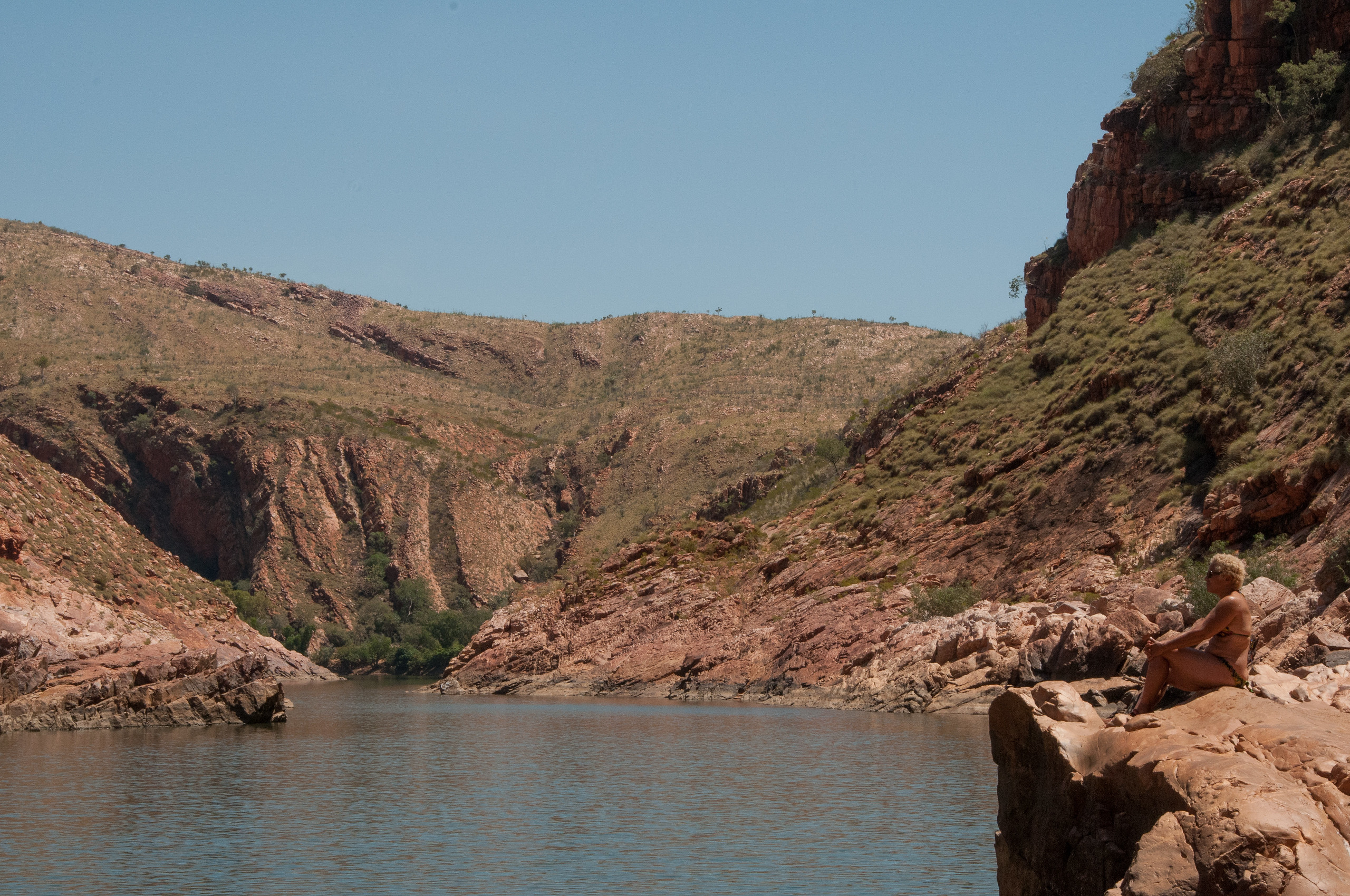 Chris crosses the Fitzroy and contemplates the walls of the gorge

We went a little further then returned to camp. We decided to eat at the restaurant and had a very nice meal under the stars.

Then we listened to a lecture about the work AWC was doing at Mornington. Especially interesting was their work on feral domestic cats. Feral cats kill a huge number of small mammals and are a big problem. Several feral cats have been fitted with devices which indicate their position.

After a bush fire small mammals are concentrated round the burnt area and are very vulnerable. It was found that feral cats can, by some unknown means, detect where a fire has taken place and move tens of kilometres to the site to enjoy the abundant prey. Cats are cleverer than you might think!

So to bed and off to Windjana Gorge on Wednesday morning.