We first went to the Burrup Peninsula which is, nowadays, an awkward mix of ultra modern oil and gas facilities (pipelines from offshore fields come ashore here), and timeless aboriginal art. We, of course, were after the art but were rather disappointed. Perhaps we were at the wrong place, or did not venture far enough, but what we saw was not as good as what we saw near Newman. I don’t have any decent photos so will have to leave you with a gas flare!

Part of our route from Dampier to Exmouth

The route was long and tedious – lots and lots of not very much.

Part of our route from Dampier to the Exmouth area

It did become more interesting as we drove up North West Cape along Exmouth Gulf. There are some expensive looking properties with boat anchorages.

When we got to Exmouth we stopped at the Visitor Centre and booked a bungalow at the Lighthouse Caravan Park seventeen km beyond the town – we fancied a bit of luxury and wanted to be assured of our bed before driving onwards.

We were told that accommodation in the Cape Range National Park, if you have not booked in advance, is assigned on a first come, first served basis at the camp entrance, when the ranger comes on duty at 9 in the morning.

Then into town to get some supplies. At the Caravan Park we signed in and settled into our nice bungalow.

We got to the Ranger station at 8:30 and joined the queue. 45 minutes later we got to the front of the queue and found that the only camp sites available were on the other side of Yardie Creek. This is a long way south and a very long way from Exmouth and possibilities of resupply. So we decided not to go there.

We decided that we would stay at the Yardie Homestead Caravan Park. This is nowhere near Yardie Creek! In fact it is north of the park, on the road to Exmouth. Because I was feeling a bit under the weather and my back was complaining about too much activity, we decided not to camp but to indulge ourselves with a chalet. And we decided to stay for five nights.

After lunch we headed north, had a swim and went up to the lighthouse which gives its name to last nights accommodation. Then back home for a barbecue.

And the temporary filling I got in Port Hedland proved all too temporary! It came out – I will get it replaced when I get back to the UK.

This was rather a lazy day. Taking advantage of the availability of a pay phone and telephone card at the camp site, we arranged where we would stay on our way back to Perth. Shark Bay was on our list so we arranged four nights at a place near there, also a place on the way – it was  450 miles to Shark Bay!

Then we hired snorkel, masks and flippers from the camp site and headed off to the Lakeside snorkelling area in the National Park.

The Lakeside Snorkel Area. The white at the skyline is the edge of the reef. The back reef runs from the waters edge to the reef. The fore reef is the slope beyond the reef down to the deep sea floor. It is covered in broken coral.

But it was very disappointing. There was a strong current from the south west and this stirred up a lot of sand, making the water very murky and visibility poor. Also the current meant that you had to paddle like fury to stay in one place.

We stayed in long enough to see that there was a lot of coral and lots of fishes but we were soon back on shore.

Chris suffering from being unable to snorkel at Lakeside Snorkel Area

We tried again after lunch but conditions were even worse. So we packed up and headed south to look at Turquoise Beach and Mandu Mandu Gorge. We found lots of coral fossils in the gorge – the formation includes Middle Miocene coral reefs, mirroring the modern ones offshore.

Tuesday morning was a very lazy time, hanging about the chalet, watching the emus walking past. After lunch we drove south of Exmouth and headed for the hills.

There are a couple of tracks which lead into the Cape range. One goes along a valley – Shothole Canyon Road – and the other goes along a ridge – Charles Knife Road. Both roads were made when the area was being explored for oil deposits.

Our truck parked at the end of the Shothole Canyon Road

Shothole Canyon gets its name from the shallow holes drilled for explosives to aid the seismic exploration of the area.

Charles Knife Road goes up to the top of the Cape Range to an old wellhead where an oil exploration well was drilled. Parts of the road go along knife edged ridges but that is not the reason for the name. Charles Knife worked for the oil company and laid out the line of the road.

View toward the Indian Ocean from the Charles Knife Road

After our tour of the inland bits of the Cape Range we returned to Exmouth and bought our supper from a local fish merchant – there is a lot of fishing in the area.

This was a remarkably lazy day! Most of it was spent round the Caravan Park. Before lunch we went to a nearby beach to see if we could see turtles – we couldn’t so we sunbathed.

Chris on the beach

Late afternoon we went back to this mornings beach and watched the local windsurfers. Then walked south to something odd we could see in the distance. 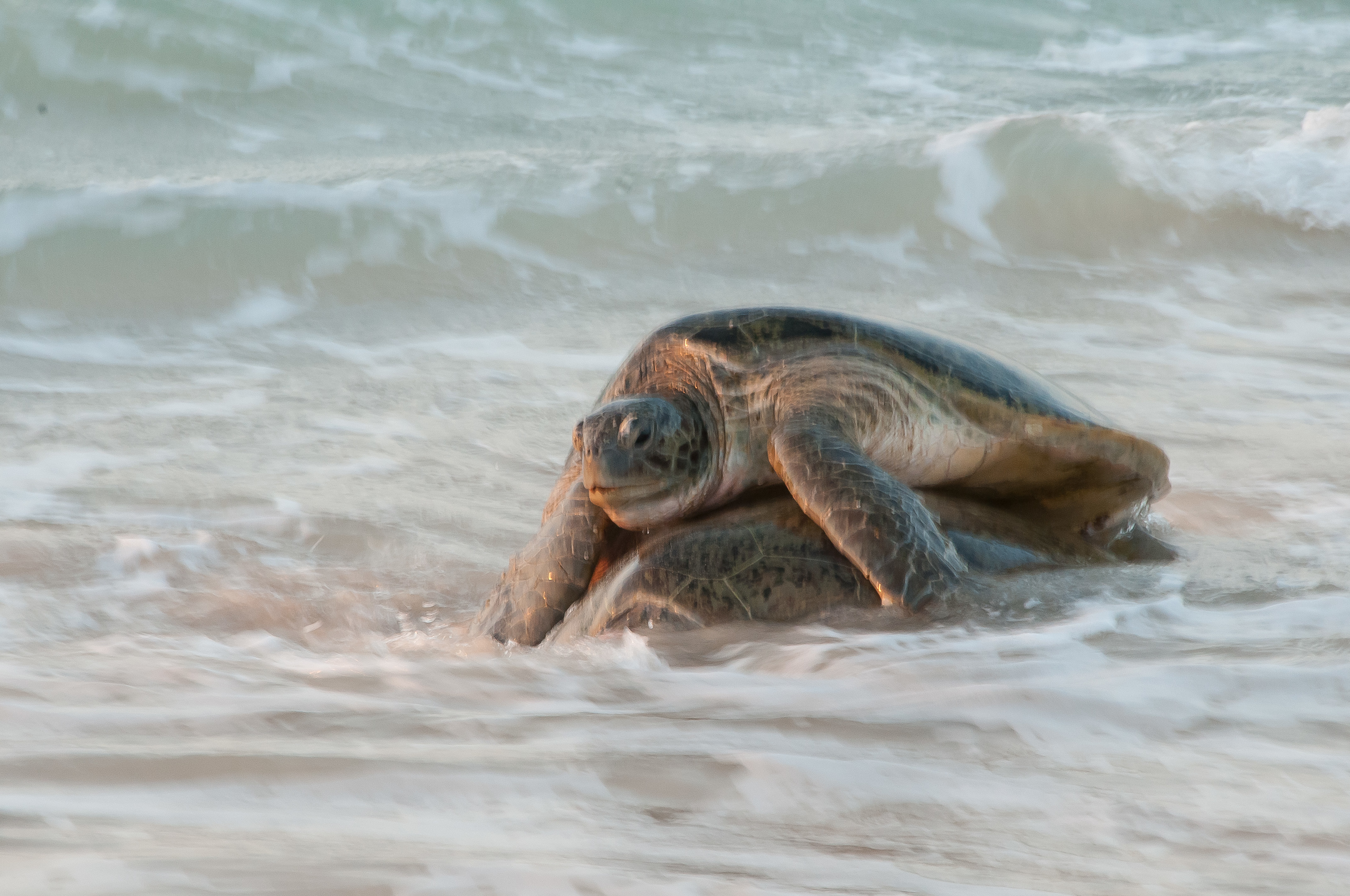 Turtles mating on the beach. Romance plays an unimportant part in the process. This and the next photo are slightly out of focus – sorry!

It turned out to be turtles mating – but we originally thought that the big one was dead! The owner of the caravan site told us what was really going on.

Turtles mating. Note the gash on the females neck

After breakfast we decided that we were not beach people and that we would not go to Shark Bay. We much preferred the inland parts of Western Australia. You might conjecture this by the number of photos I took on the coast compared to inland. So we phoned and cancelled our Shark Bay booking.

For our last day on the coast we decided to give snorkelling one last chance and hired what we needed and headed to South Mandu Beach.

And found that the sea was too rough to snorkel! But we did see a wallaby! So carried on south to look at Yardie Creek. It does not reach the sea but the pool extends up the gorge. We resisted taking the boat trip up the gorge.

After lunch (at the Caravan Park) we tried our snorkels at Oyster Stacks but again the sea was too rough, but we had better luck at Turquoise Beach. The water was turbid but at least we got the snorkels wet. And we had a fearless corulla nearby.

Chris on the beach